RSS Feed
← FARMER IN THE DELL
FIND A WALL, TEAR IT DOWN → 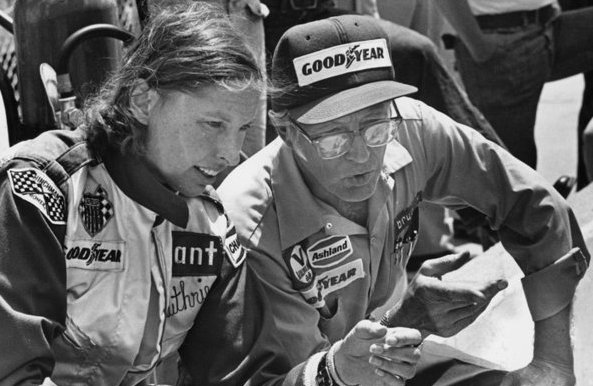 Janet Guthrie and Rolla Vollstedt talk it over

The race to modern times began with the old surveyors on their first visit; they were still on the job a hundred years later.

To some, Lewis and Clark belong on top of the American secret agent list for their crafty mission to claim the west coast.

To others they are the greatest field scientists of their time.

Anything kicking off with a parade is a good time, this year and yesteryear, with the roar of the crowd and thunder of the wagons rolling by.

In perfect Lewis and Clark step, the Oregon Historical Society opened their own parade on June 1, 2011, complete with the roar and the thunder of race cars and race car people steering between Rolla Vollstedt’s Indy 500 cars and the Benson.

Not what you expect from history?

Imagine your guts rumbling when you stand next to a rare Chevy engine at full throttle.  Expect to wonder why the cars look like jet planes on wheels.

Then wonder how a WWII guy like Mr. Vollstedt, a self-described grunt, made fast cars.  Here is a man on the run with Patton’s 3rd Army, heading into Germany.  The only moment he had off was cut short by the Battle of the Bulge.

“Did you learn any German or French, Mr. Vollstedt?” someone asked.

“It wasn’t a cultural exchange trip.  I didn’t learn a language.  The only talking I did was in my field of fire.  Do you know what that is?” Mr. Vollsteadt said.

He’s a guy who returned home to change the culture in the sport of Indy Car racing, and the cars.  You won’t hear much about it, but Mr. Vollsteadt owned the car Janet Guthrie drove in the 1977 Indy.

Janet Guthrie broke the gender barrier as the first woman to qualify and run the Indy 500.  She did it in a Rolla Vollstedt car.  Together, they scored one of the greatest victories in sport when they opened racing up to another half of the country.

In perfect Lewis and Clark step, history rolls forward at top speed, aided by an infantryman turned hotrodder, and you get to see it all from the OHS pits.

Strap in and take a ride.

Since I'm from Oregon I know all about wood; It's like writing a blog. For example I once made a four poster bed from rough cut lumber. It broke the first time I laid down. Now it's four foot stools. Every blog post on boomerpdx.com comes from the same process. Be a good surfer and sign up. You might be sorry, but not that much. Talk soon, David
View all posts by David Gillaspie »
← FARMER IN THE DELL
FIND A WALL, TEAR IT DOWN →