A Time To Relax? 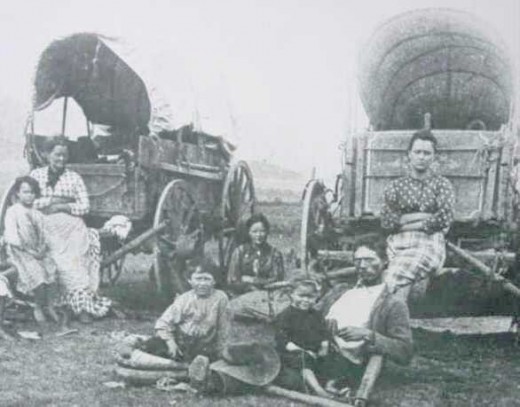 Pioneers games on the Oregon Trail?

Or was it more like hunker down and count the days?

If the figures are correct, one in ten pioneers died on the trip.  65,000 deaths equal one grave every fifty yards from Missouri to Oregon.  The numbers differ according to researchers.

Today you take a shower to scrub off the dirt and sweat.

On the trail you might jump in a river if no one you knew had drowned doing it, or been snake bit.  Otherwise you go to sleep dirty and sweaty and wake up the same way.

Today, images change so fast that time seems to speed up.  From television, to internet, to cell phone, technology keeps things moving at an astonishing clip.

On the trail the view was the same, the hind end of an ox.  Maybe that ox tail was a focal point to avoid the other sights.

A closer look at the scene above shows seven people and no smiles for the camera.  It doesn’t look like a fun time of exercising freedoms of choice and expression.

Those faces reflect something far more grim:  hunger, longing, loss, which all seems to add up to ‘what are we doing here?’

Three women with arms crossed stare at a camera along with kids and one man.  Either this is the Mormon Trail and it’s all good, or there’s men missing.  After a fifteen mile daily quota I doubt they’re out of the frame playing catch with a rock.

From the half-dead expressions of the figures in the photo, the missing men might be all the way dead and left behind.

The faces on these people are the faces of hardship.  In their case it’s voluntary hardship.  They haven’t just been released from the Gulag, or re-education camp.  Theirs aren’t the faces of being sentenced to walk the trail.

Whatever the reason the pioneers picked up and headed west, they eventually shared a common theme:  Overland travel was miserable.  The evidence is etched on their faces.

From some of his work, you might think Vincent Van Gogh had been on the trail.

Understanding family and regional history means finding original sources.  Otherwise you get second-hand word of mouth accounts dressed up in the flowery language of current interpretation.

You can do better that that.